A quick and satisfying card game about the Demoscene and a celebration of mathematical art.

In this game, you take the role of a fresh coder trying to make a name for themselves by coding awesome demo effects, gathering collaborators, and ultimately placing well in prestigious demoparty competitions.

The gameplay revolves around trying to play enough value-adding cards, called “Shaders” which will allow you to place well in the current competition and receive recognition, or “cred” as a reward. You will craft you own custom deck before the game and go three of these competition to see if you reach your overall cred goal, and therefore achieve the recognition of your peeps as a master of the craft.

The game at the moment supports only single-player, but there’s plans to implement multiplayer eventually. The single-player rules can be found here and might change as the game develops from its current early form.

You can play directly on your browser from itch.io.
However be aware that a game running in a browser is not as optimized as running as an executable, so you might encounter some “choppyness”.

A better experience can be achieved by downloading an executable version directly to your PC and running it from there.

If you find any bugs or have ideas for improvement, absolutely let me know through the issue tracker.

Please be aware that the game logs anonymized play stats, to help us balance it. It does not retain any info about the player however, only about the result of the game (decklist, time taken, end result etc)

This game initially arose out of a need to work on something concrete in order to help the Card Game Framework mature in capabilities. It is meant to push the capabilities of the framework to the max and where lacking, push the framework’s improvement as well.

Why this specific game concept? I’ve always been a big fan of the results demo effect coders achieve. They are amazing works of art and receive criminally little attention. Typically only by other coders.

I felt that the awesome graphics of a Fragment Shader would fit very well in a digital card game as card illustration and animation which infinite more variability than any other card game could achieve, at only a small fraction of the size. However it would be very hard to make the varied art out there git a game’s theme…unless that game was about the demoscene itself!

This is further helped by the fact that demo effect coders, unlike a lot of more traditional artists, release their art directly to the common, which a commons-game like this could utilize in order to kickstart their visuals.

TL;DR: I thought it would look fucking cool to have animated shaders as card art. And I think the results speak for themselves!

The game is only possible due to the amazing work that is the Godot Game Engine.

It would also not be what it is, without all the shader arts released into the commons via Shadertoy. Go check it out and especially the artists whose art I’ve reused for Fragment Forge.

However not all art can be Shaders and this is where Artbreeder comes in, where professional-quality art for personality-based cards can be procured.

And finally a ton of thanks to everyone who releases assets into the commons and helps improve humanity as a whole. I only hope this little game of mine adds something worthwhile as well. 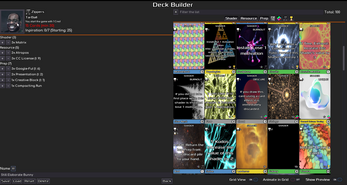